I added a counter in the sidebar to keep track of my progress, and as I paint different kinds of miniatures, I might break that down by scale with a running total at the bottom. How do you keep track of the minis you paint? Is there a better way of tracking my progress? I’d be interested in hearing if and how you do it.

Last week I posted a teaser of what’s to come by showing this image: 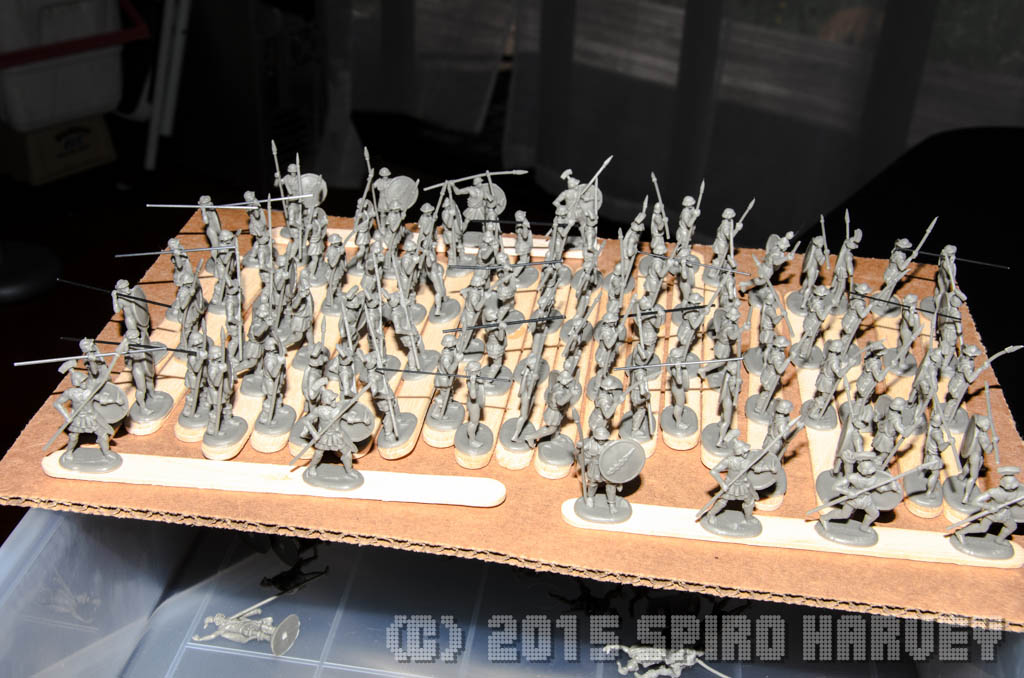 and instead of posting a blow-by-blow account as I did with the Romans, I thought I would just post the completed models. It took me a week to do them, so it’s a week’s progress. Let me know if you’d prefer photos of the process and next time I’ll take photos of various stages.

Anyway, on with the show. Here are the completed models all together. 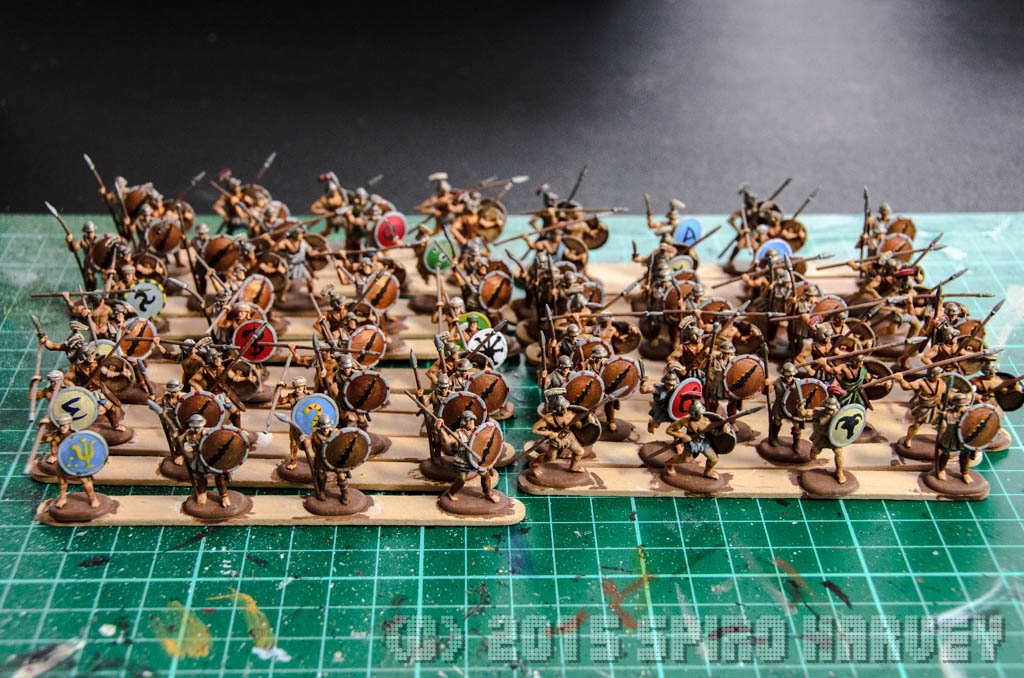 I considered painting the hoplites using the same method as the Romans, by doing basic block colours and then going over it with the Quickshade Lacquer. In fact, I finished a couple of minis using that style, but didn’t like the result. They came out too dark and I wanted the Greeks to have brighter colours, especially the traditional white and blue of their flag.

The other thing that I tried out was a colour for the armour. I wanted to give them a copper colour, but didn’t have any copper paint. I did, however, have brass and gold. In my paintbox are two different Games Workshop Shining Golds. At different times, they released completely different shades using the same name. So anyway, I tried the brass and the brighter of the GW Shining Golds, and lacquered over them. The brass ended up too dark, and the gold was too bright. Here are the test minis which were Quickshaded.

First, the armour done in brass. 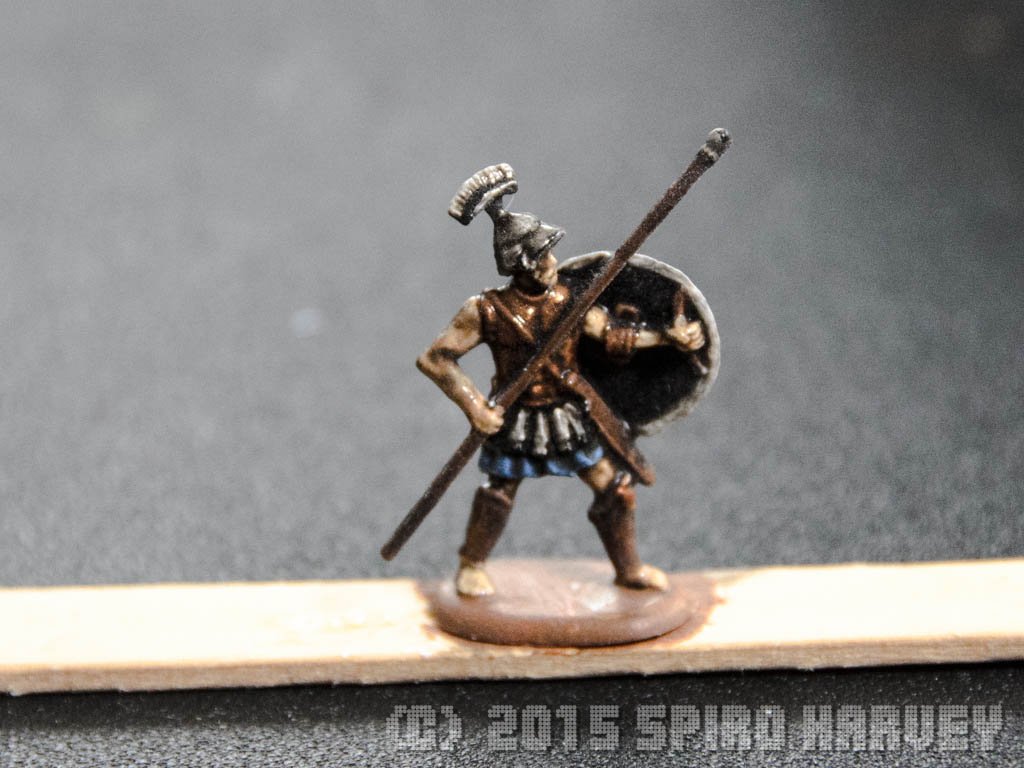 And then the Shining Gold. 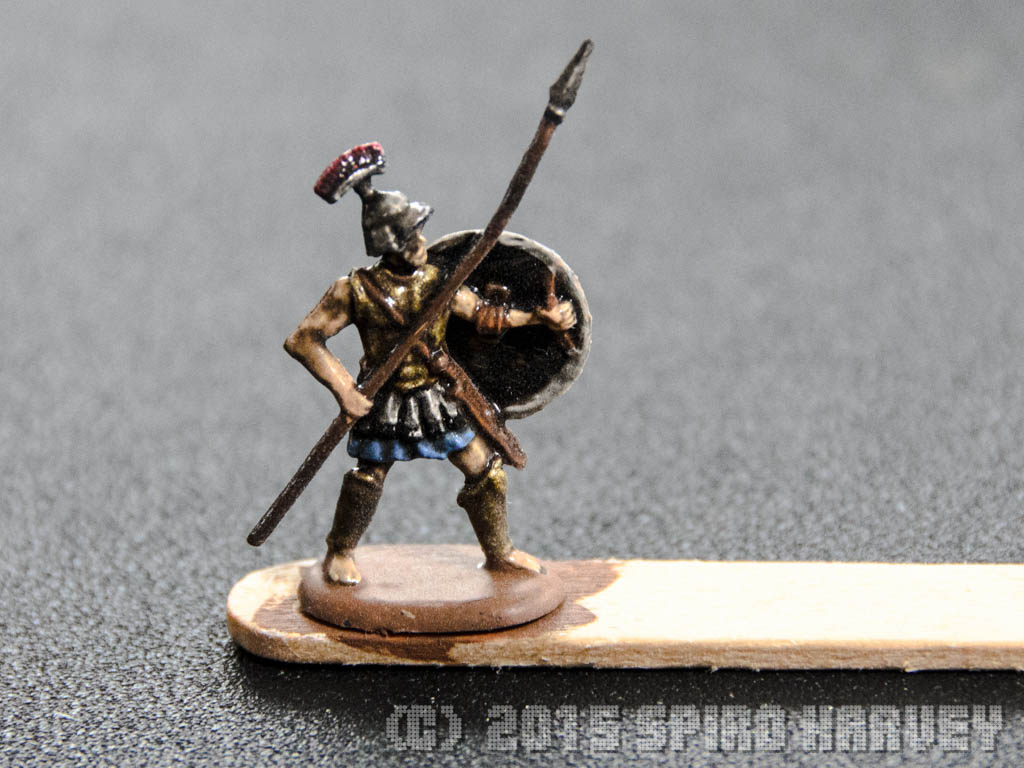 In the end I mixed the brass and the darker Shining Gold, and came up with a nice coppery colour that I did the rest of the minis with. The reason the two test models above aren’t glossy is because I coated them with Army Painter Antishine Matte Varnish.

The rest of the models I took more time with. Because they weren’t having a lot of detail hidden by the Quickshade, I put a bit more effort and included a bit of highlighting (painted on in some places and drybrushed on others). Then I coated the miniatures in Army Painter Soft Tone inkwash, leaving the shields uncoated. After that, I finished them up with Antishine varnish.

I think they turned out pretty well, and I’ve since spotted a few places where the drybrushing and the ink washes flowed over, so I’ll fix those up at some other point, or hide those models in back ranks. 🙂

The only thing left now is to base them, and as for the Romans I haven’t figured out what I’ll be basing them on yet. We’ll see how things go, and they’ll probably be based for Hail Caesar.

I must say, that all in all, I’m quite impressed with the Army Painter paints, and especially their shades and inks. This is the first time I’ve used them for so many figures. I have found that paints like GW and Vallejo need water added constantly, where the AP paints don’t. They flow far better. The downside to this is that their pigment is a bit thinner, and this is especially noticeable on the white and yellow paints.

But I really love the ink wash. It really brings out the figures beautifully, and adds depth to almost all colours I tried. It looked good on everything from the whites to the blues to the beiges. Didn’t do so well on the browns, but maybe dark tone would have done the trick. Otherwise I’d have tried a black wash. But at this scale, that’s not too big a deal.

Here are a few snaps of the finished models. I painted a total of 94 hoplites this week, so that brings this year’s total to 154 miniatures! And January’s only half way through! 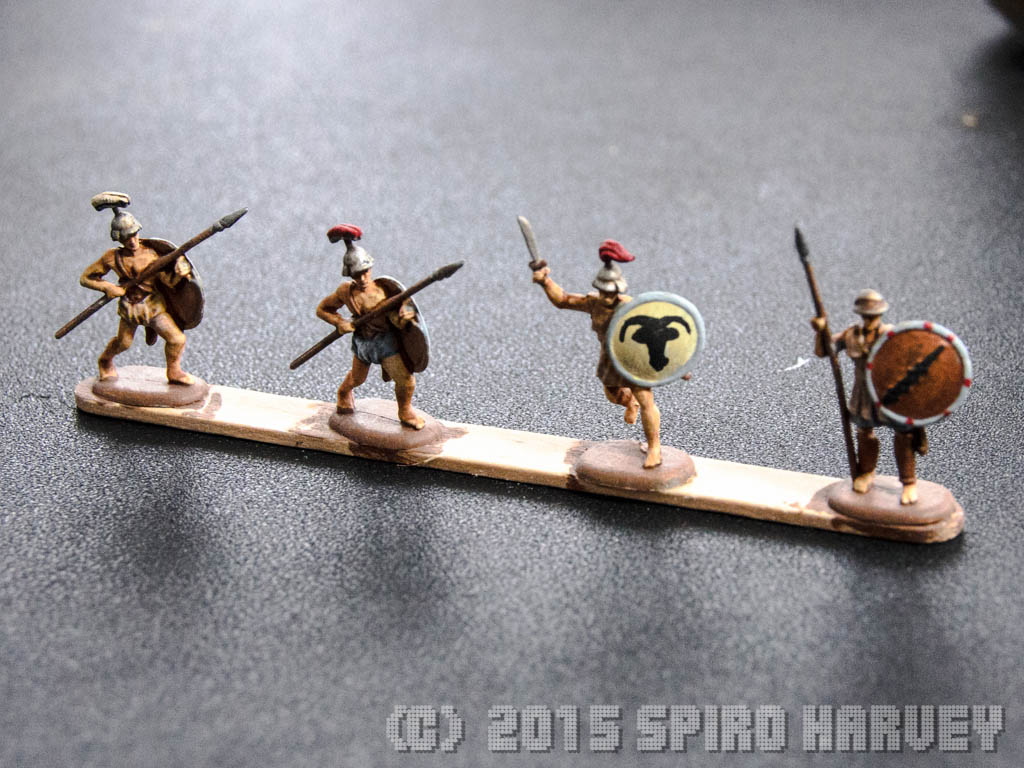 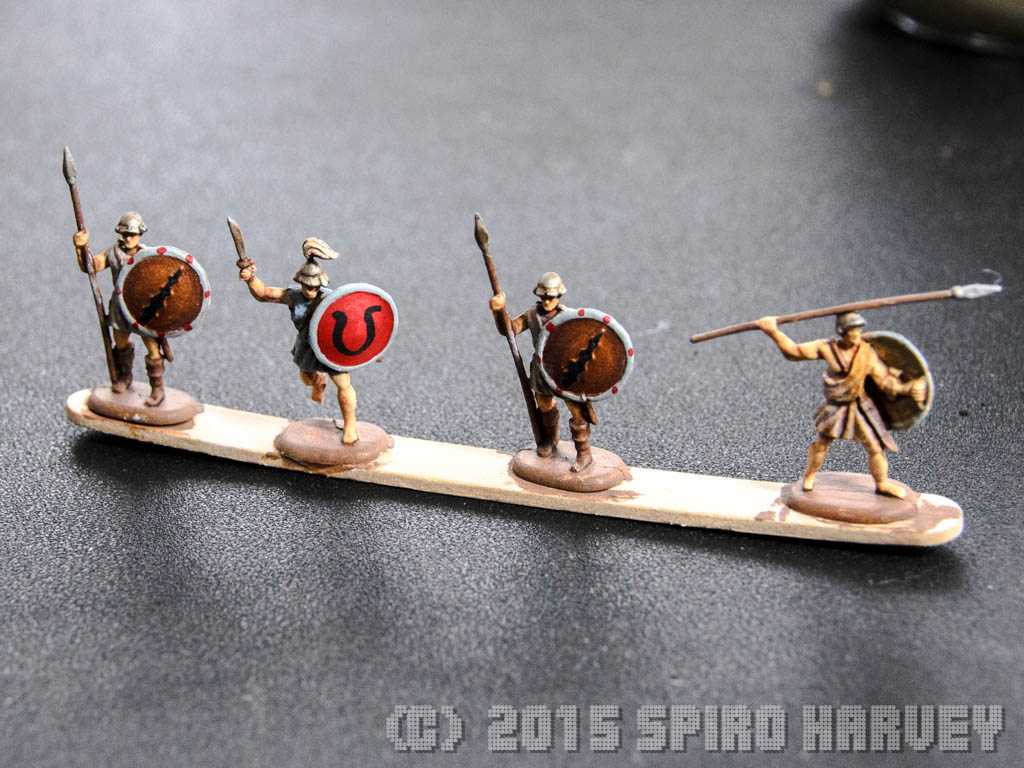 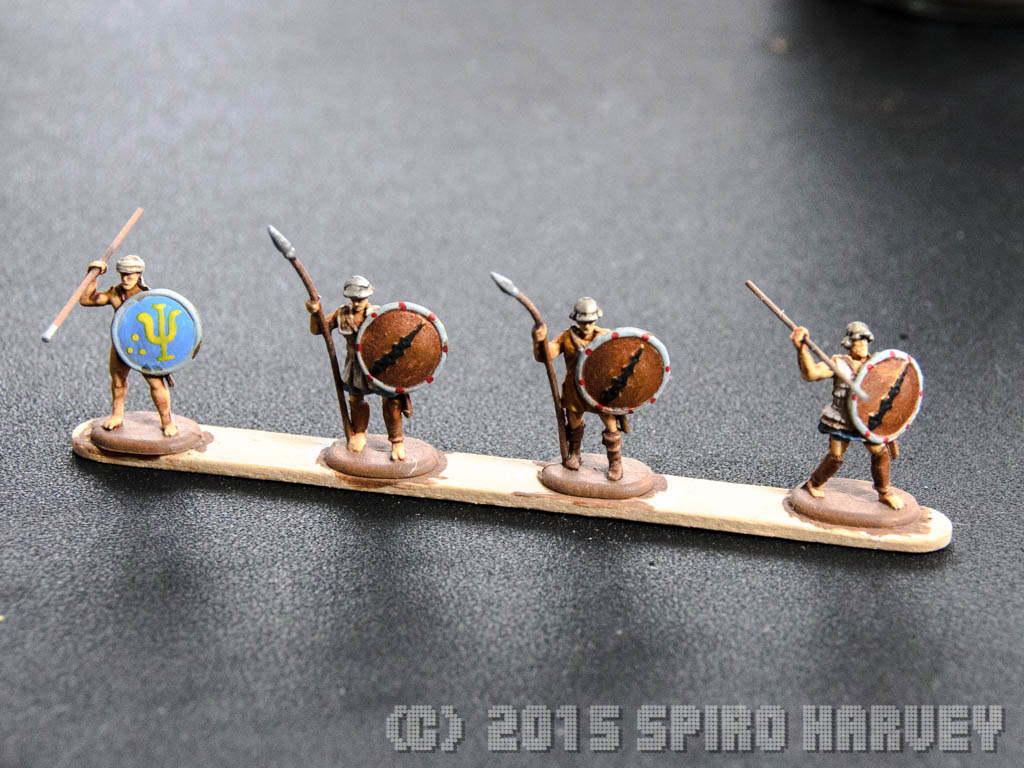 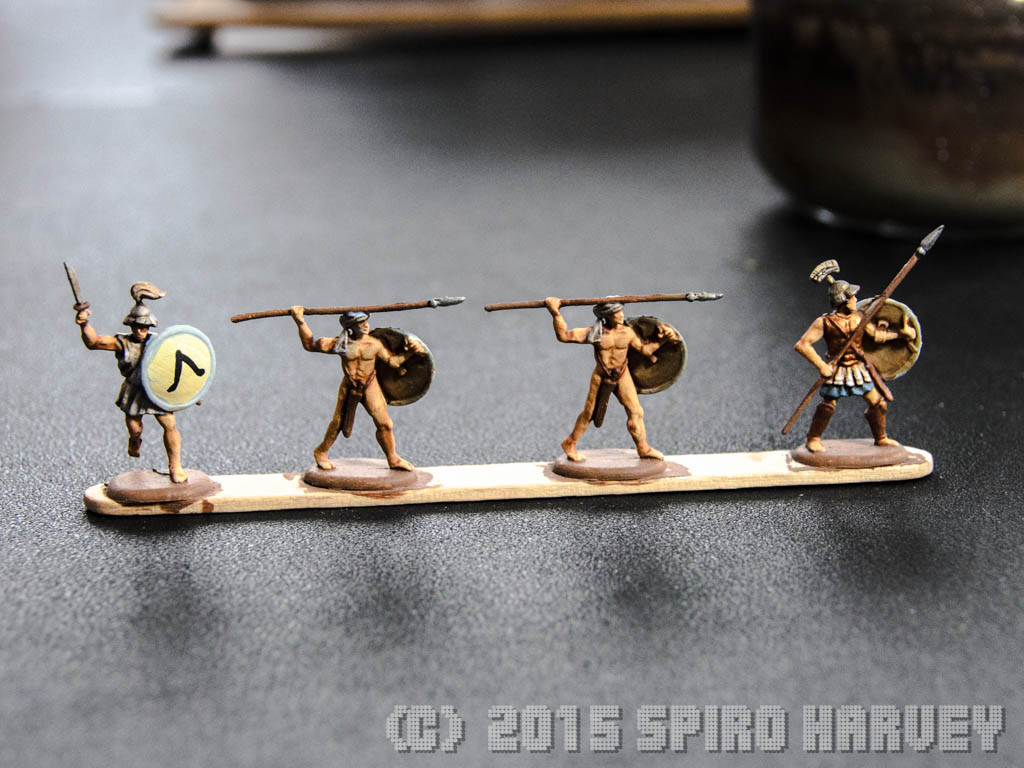 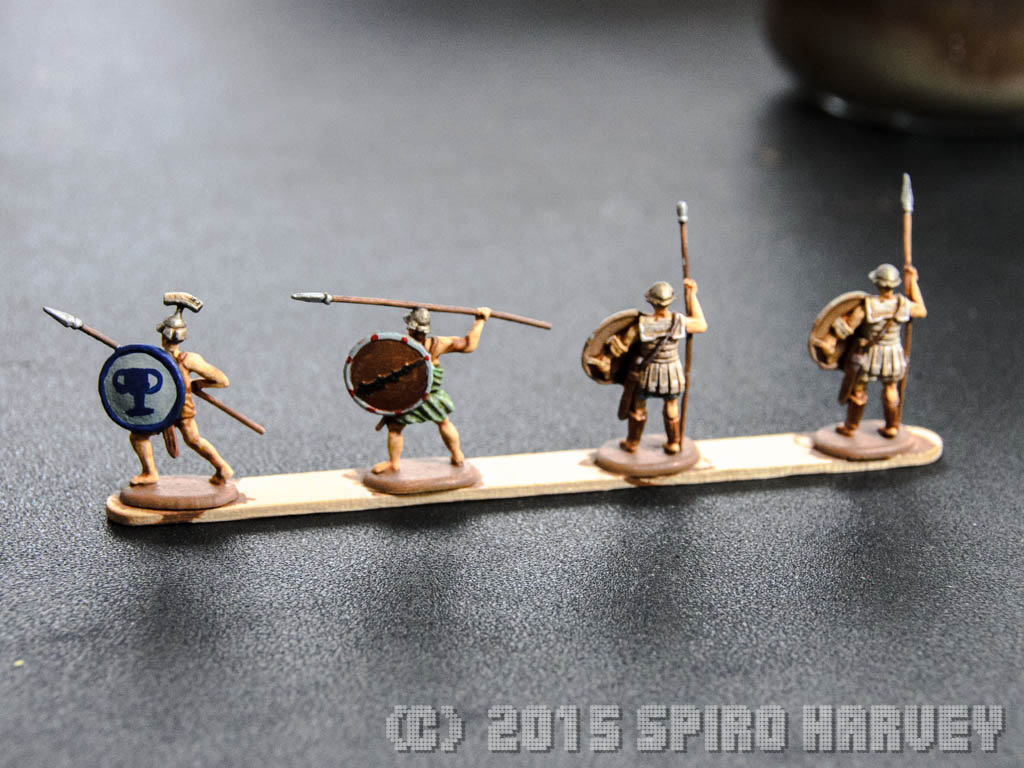 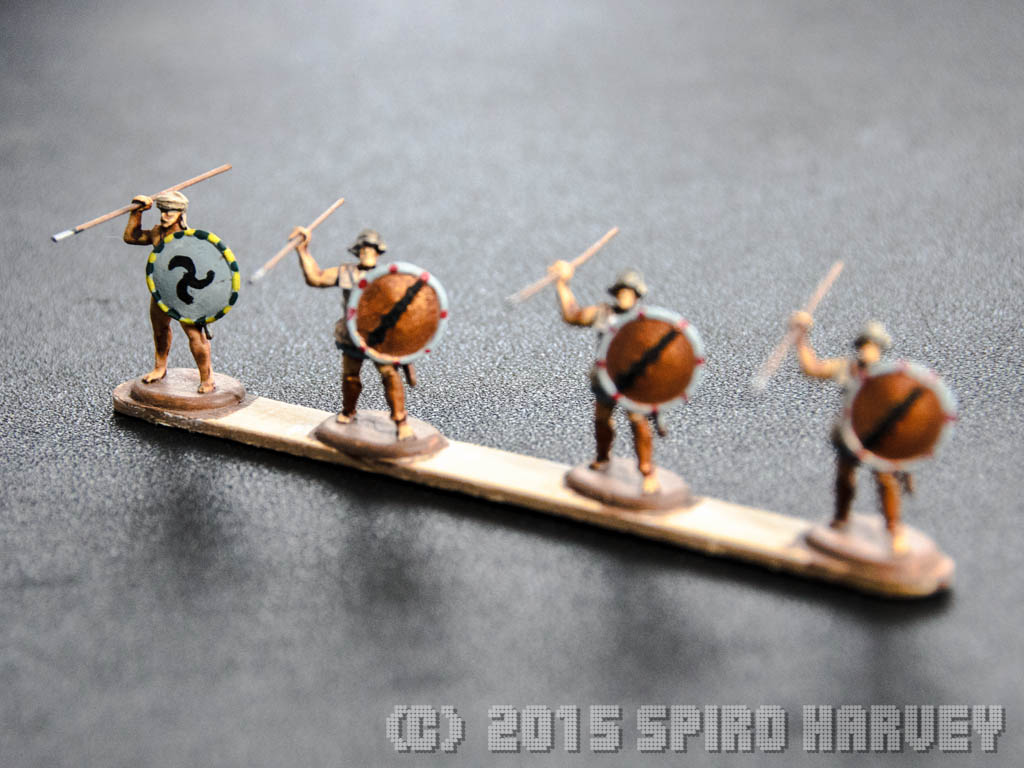 Sorry, I didn’t set them up in my studio, so the lighting’s a bit naff. Hope you enjoy them though.