A couple of weeks ago I posted that I had started a commission of British Redcoats from the American War of Independence. Well, I’ve almost finished. The main body of troops are done and the incomplete ones are the standard bearers and the COs. 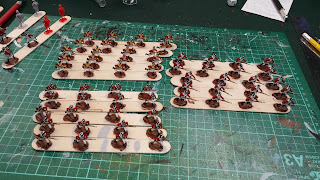 As usual, the owner is going to base them.

These figures are unlike any I’ve ever painted, and I have to admit that I didn’t paint them very efficiently, especially given the basic flat colour scheme. But I was quite worried about getting the pin striping done correctly, and as it turns out, I’m not really that happy with them.

White is also a very difficult colour to work with. I was using the Army Painter white tube, which didn’t have very good pigmentation and was very thin, even after a couple of coats. In the end I covered most of them using my Liquitex white primer because for some reason, that does a better job on larger areas. The straps on the backs, though, were 50/50. Some came out ok, but most didn’t. 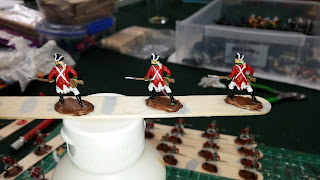 I think part of my trouble was that I tried to add the straps later. The process I used was basically, undercoat in grey,. paint the faces, ink wash the faces, paint the white areas, paint the red on the coats, then do the black and brown areas. And the red was done in a flat covering the whole coats. This meant that I was going back over the straps and picking them out later–a technique which worked for me with my WWII 15mm British, but those were colours with better pigment. 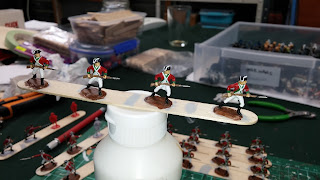 Next time, I think I’ll paint the Redcoats completely in white, and make sure that’s a good solid coat of paint, and apply the red on top very carefully. 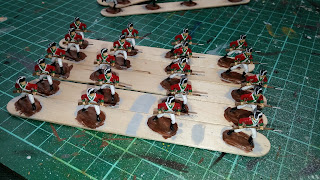 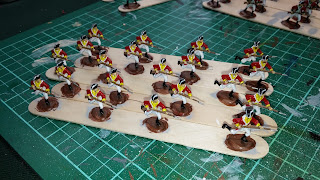 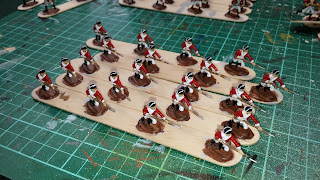 The table-eye-view is good as these are only 20mm minis, but close up I think they look pretty horrific.

If you have any advice to help me for next time, I will take it all on board. The two problems I think I had were: they took me too long to paint because I was going back and forth retouching up things everywhere, and the white strapping wasn’t that crisp.

Actually, as I type this, perhaps another method would have been to paint them a khaki/sand colour first as a shadow, and then go over in white. That would have the advantage of laying on a thicker paint first as a better base for the white, but perhaps that’s just taking me back to a time sink.

These are the ones I still have to finish on this commission. 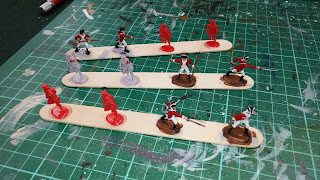