I just noticed that Reaper Miniatures have a Kickstarter campaign for CAV: Strike Operations. 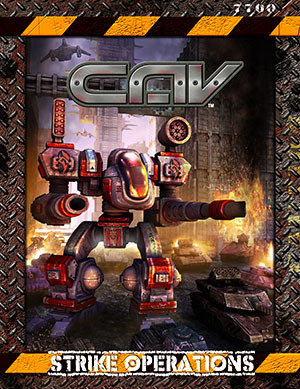 Personally, I’ve never played any edition of CAV. My friends and I, however, have played a LOT of Battletech over the years. And recently, a new friend and I have tried our hands at resurrecting Adeptus Titanicus. The latter, however retro, is an awful set of rules.

It’s even got me thinking about writing my own robot battle game (which naturally, those who know me will not be surprised to learn that I’ve already started and have most of the mechanics worked out).

But being a sucker for new & shiny, this piqued my interest. Until…

“Bones are only the best high-quality plastic gaming models to hit the industry…ever.“

“The CAV: SO line of figures will use the same plastic as our fantasy figures“

That first quote is a complete lie. I supported the first Bones Kickstarter, and after receiving my figures, I concluded I would not support the second. The plastic is utterly horrendous. It’s soft and bendy (the exact opposite of Games Workshop plastic which is hard and brittle), and almost every single miniature arrived bent or in some way deformed. I don’t have the time or patience to heat them all in hot water, and hope that I can set them in the poses they’re supposed to be in.

To me, they were simply really cheap figures that I can throw some paint on and use them for D&D games in a pinch, but had we not got so many miniatures in that set, I would have felt utterly ripped off, especially with their bold claims (bald faced lies) that they were made out of the highest quality plastic.

OK, so the material isn’t as bad as 1/72 scale figures from companies like Zvezda or Airfix (which is soft and brittle), but when they say that the CAV: SO miniatures will be of the same material as the Bones minis, I’m walking away. In fact, I would probably compare the plastic to that used by the Wizards of the Coast Dungeons & Dragons and Star Wars miniatures that came out a few years back.

I will say one positive thing, however. The multipart models had pegs designed to only fit one way, which was actually a brilliant design.

I just don’t think models made of that plastic are worth the asking retail price. At the current Kickstarter price of US$100, there are 35 models included, which puts them at US$2.85 each. At the current exchange rate, here in New Zealand they are about NZ$3.40. However, there will be an unknown shipping charge attached. The more free miniatures they include, the more international backers will have to pay in shipping.

If I was in the States, I’d probably get on board if the cost came down to $2 a model, but there’s no way that’ll be the case for international buyers.