I have mostly finished the 40K Chaos Cultists I showed in the last post, but for a change I decided to switch to my 6mm Marhaf Legions, miniatures by Plasmablast Games in Greece.

It’s been far too long since I’ve done any 6mm scifi gaming, and I really want to get these minis painted before Polyversal is released. So at the moment my desk looks like this while I watch season 1 of The Expanse. 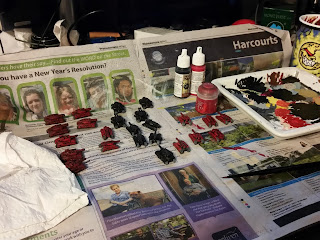 A bit hard to see the minis among the newspaper. Maybe I’ll get a plain colour dropsheet next time. 🙂

But here are the progress pics of the stages for these tanks. First prime in black, then drybrush the tank treads in light grey (Army Painter Ash Grey), touch up the bits of armour I greyed out with black, after which they look about like this: 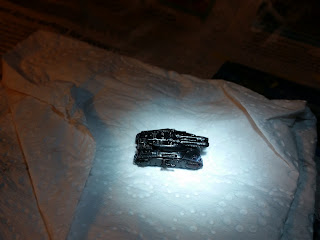 Then I paint the raised parts and panels in GW Khorne Red, which I found a nice solid base colour. I leave all the recesses black. At one point I tried dry-brushing the red to save time, but I found that I was losing the shading. These minis are just too small, or my hand is too heavy.. Either way, I went back to manually painting the base colour. 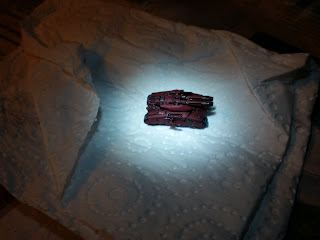 From there I use Army Painter Dragon Red as the main highlight layer. This covers most of the original Khorne Red, but I leave some parts to produce some contrast and depth. 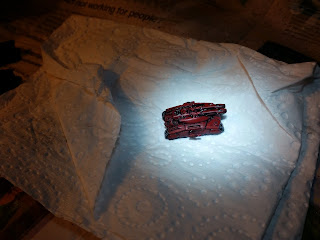 You can see here that the ones with the Dragon Red highlighting look a lot better. I’m toying with a subtle final highlight and have done one with orange (a bit of AP Daemonic Yellow added to the Dragon Red) but it might be too subtle.

My last force (Plasmablast Progenitors) are a beige colour and use bone as thee main highlight and white as the edge highlights, but I’m worried white might be too much of a contrast to the red. I’ll do a few tests and see… 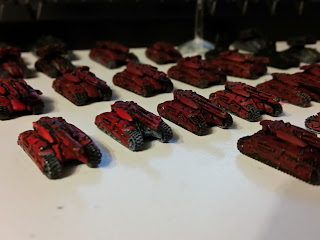 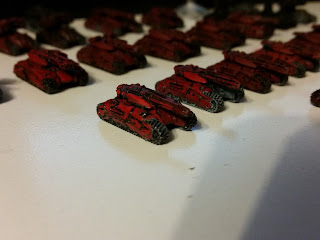 Either way, I love the way these are turning out. They’re fantastic minis and Plasmablast are my favourite 6mm manufacturer.